Nephroid Caustics! You Light Up My Life!

Oh, I forgot to mention…there’s another kind of caustic reflection that’s as near to you as your coffee mug: a nephroid caustic. That’s the name for the little shape that forms when sunlight slants into an empty cup or bowl. 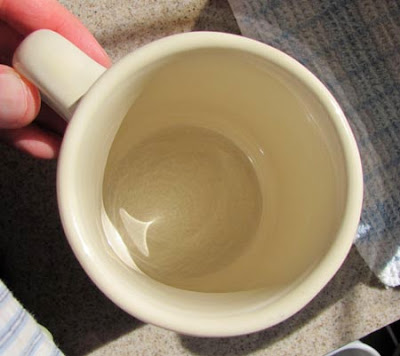 These mathematical figures are called “nephroid curves” because they sometimes have a kidney-like shape, and they’re called “caustics” because they’re focused rays, so they could potentially burn something (but dang, the won’t keep my coffee hot).

Note that in the photo there’s also a caustic halo bouncing off the outside of the mug, too. Any time you’ve got glass or metal objects in direct sunlight, there will be lots of caustic effects all over the place.

The giveaway that it’s a caustic effect (as opposed to plain old reflected light or highlights) is that the light is focused into a definite shape with a bright line or edge around it.

And now you have a topic that you can try out at the coffee machine to find out who are your kindred visual geeks.
—-
Previously on GurneyJourney: Caustics, Caustic Reflections
Wikipedia on optical caustic effects and nephroid geometry.
CG Caustic rendering tutorial

I found this to be particularly interesting because I just recently finished this painting:

I definitely noticed the phenomena while working on these, who knew it had a name? Thank you, Jim!